How to provide ATIS in the GRF era?

ATIS is typically parsed from SNOWTAM- or from METAR SPECI group (MOTNE) string. Did You know, that MOTNE will cease to exist and SNOWTAM string will completely change, when GRF runway condition reporting takes effect.

Do pilots use SNOWTAM or ATIS as a basis for aircraft performance calculation? The answer is: yes, pilots use both, but ATIS is considered to be even more important. Pilots will receive SNOWTAM messages for all relevant airports during flight preparation. SNOWTAM data is used for the preliminary check to determine the sufficiency of runway length in both take-off and landing. The latest runway condition information and final decision to actually execute takeoff or landing are however based on ATIS. In this respect, ATIS must contain all information necessary for pilots to calculate aircraft performance.

There are multiple methods to complete ATIS message. All the methods however have one common factor: the latest runway condition report (RCR) must be available before ATIS can be updated. Since ATIS is the pilot’s primary source of data for final aircraft performance calculation, it is important, that ATIS content is correct and ATIS is updated as soon as the latest RCR is issued.

Since MOTNE will disappear and SNOWTAM format will be completely changed, the most probable current ATIS creation methods will not be valid with GRF reporting format.

Other issues to be considered regarding ATIS are:

• What RCR content should be included in ATIS?
• Will SNOWTAM content always be consistent and can ATIS be properly parsed from SNOWTAM without errors?

In terms of quick and flawless ATIS updates, airports should use “parallel” rather than “circle” updates. In this context “circle” processing can be interpreted as follows: 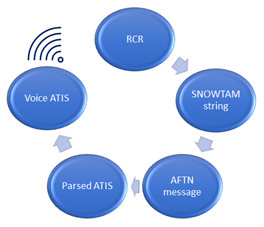 In terms of runway conditions, “fast lane” for quick ATIS update would be to create a complete ATIS readout string simultaneously with RCR. ATIS readout can then be passed parallel with SNOWTAM message for further processing.

By creating runway condition ATIS readout from the RCR raw data, all parsing errors and unnecessary delays can be avoided.

To implement GRF reporting and ATIS in such a manner, that pilots can carry out aircraft performance calculation: safely, based on correct-, timeliness- and valid runway condition data, can be accomplished by using the Global Runway Reporter (GRR) application. GRR application has an optional ATIS output for runway conditions. GRR will create runway condition ATIS readout string for each runway and each runway direction every time when new RCR is issued. This information is passed on for further processing parallel with the RCR. If you wish to have more information about our Global Runway Reporter (GRR) application feel free to contact us.